One thing in my WiFi journey I’ve found interesting, is how well the technology works over what seems a very large range of WiFi signal strength. A bit like Conor McGregor in the ring, WiFi just keeps coming at you, no matter how you try to run or shield your face from it’s blows..

Let’s not get too Isaac Newton, but basically in the radio world, signal strength varies exponentially as distance varies linearly. This is why when we look at WiFi using a linear scale, such as milliwatts, we see such small values alongside such large values.

And this why we prefer to use dBm as our scale. A logarithmic scale like dBm turns exponentially varying numbers into linearly varying numbers. Making them more usable to everyday engineer types.Ways to optimise the available airtime on your WiFi network to improve speed and performance.

Take “three hundred and nine septillion watts” for example (the power of the sun). Have you even heard of septillion before? 3.9 x 10^26 is much easier to read and you can easily discern the scale of the number in question.

This led me to wonder.. what do the typical power levels we deal with in WiFi look like in terms of orders of magnitude?

You may also know that a change of +10 in dBm is a change of x10 in milliwatts. And x10 is precisely one order of magnitude. So already we would have an intuition about how many orders of magnitude we see in typical WiFi usage.

But let’s use 6dBm graduations instead. This equates to a change of x4 in milliwatts, and incidentally, x2 in distance. So it’s more often that we would be thinking in terms of plus or minus 6 in WiFi. Or more often 3. But that would make this table longer that it is already..

The order of magnitude is just the exponent from column 3, after converting milliwatts to scientific notation. The descriptions are rough, but when dealing with orders of magnitude, you’re allowed to be a bit hand-wavey.

Ok, what does this table tell us?

THE DECLINE OF EIRP

Just like Conor’s weight as he approaches the fight, signal drops with distance.

We can see there’s already at least 3 orders of magnitude just between an AP and holding your client right against the AP’s antenna. But it’s hard to get a precise fix on this at close range.

Magnitude of 3+ does make sense though. By the FSPL formula we lose about 42dB in the first 1.0 metres from a transmitter. That is, about 4 orders of magnitude. This is because of Isaac’s Inverse Square Law. 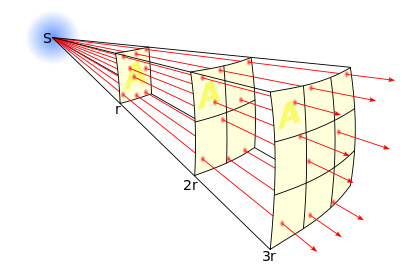 But we only lose another 5dB, or 47dB total in the first 2.0 metres, so less than 1 order of magnitude more. This is exponentials at work.

Realistically clients in the real-world would rarely see more than -24dBm (magntude of -3), at a couple of metres from an AP. Picking a medium power-level for the AP, like 12dBm (magnitude of 1), this a 4 order of magnitude decline, as we saw before.

But this already highly-attenuated signal is just our starting point for usable WiFi.

How Low Can It Go?

We would normally measure the noise floor somewhere around -96dBm (magnitude of -10). And we need at least a couple of dB more for the lowest date rates, and probably a couple more a connection that could be considered stable enough to be a connection. Let’s say -90 (magnitude -9) is our real-world practical minimum for received signal strength.

This a drop to magnitude -9 from a) magnitude 3 at the AP, and b) from -3 at where you would expect most normal people to be when using their WiFi..

So there we have it, the typical range of received WiFi signal strength is about 6 orders of magnitude, or, a factor of a million.

And the typical range from a transmitter to it’s limit of usable reception is about 12 orders of magnitude, or a factor one thousand billion.

Not bad. Even Conor McGregor might be impressed with those power scales.

Please confirm deletion. There is no undo!